SAHANZ annually offers The David Saunders Founder’s Grant in memory of the founder of the Society, to support research by emerging researchers in the disciplines of architectural history and theory. Applications can be made to apply for funds to assist in field-work, archival assistance, printing and reproduction costs in preparation for publication. The award cannot be used to fund conference travel or registration. The Grant amount is AUD $3000.

The deadline for applications is Friday 24 June 2022.

Completed application forms should be emailed to the Society’s Secretary at secretary@sahanz.net. 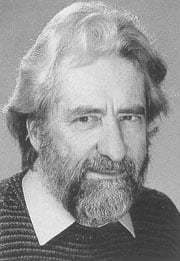 David Saunders was instrumental in forming SAHANZ and as foundation President he registered the society in South Australia on 12th of September 1985. He was Professor of Architecture at the University of Adelaide and also President of SAHANZ when he prematurely passed away the following year.

He was educated at Royal Melbourne Institute of Technology and at the University of Melbourne, where he also later completed his Master’s degree on the architecture of 19th century Melbourne architect Joseph Reed. David Saunders was a lecturer, then senior lecturer, at the University of Melbourne between 1956 and 1968, where he became the first academic in Victoria to specialise in Australian architectural history. Saunders was also editor of the pithy and incisive architecture broadsheet Cross Section from 1955 to 1961. As an architect Saunders designed his own house in Parkville in 1962 after his return from the United Kingdom as part of a Nuffield Fellowship. The exposed materials and strident honesty of this post-war interpretation of the terrace house startled many and paralleled interstate experiments in New Brutalism.

In 1968 the Saunders family moved to Sydney where David took up the position of senior lecturer at the Power Institute of Fine Arts at the University of Sydney. In 1977 he was then appointed to the Chair of Architecture at the University of Adelaide where took a decisive role in redirecting that school’s curriculum.

David’s contribution to architectural history in Australia is substantial. He was the author of several texts including the important Historic Buildings of Victoria (1966). He gave considerable service to the National Trust and the South Australian Heritage Committee. He was also the first Australian President of ICOMOS, the international professional conservation organisation.

His career was one of dedicated service to the conviction that Australian art and architectural history was of great importance and interest. He not only demonstrated its academic potential in his own work but… provided the tools for others to work in the same field. His contribution as a teacher in training others, several of whom in their turn are now also eminent architectural historians, cannot be overestimated.

Former Recipients of the Saunders Grant